Closing out October with an Update

Looking at the date of the last post I have been rather bad about getting an update out.  Since the last post I’ve done a couple shows worked on some new projects and attended a great hammer in.

I was fortunate enough to get a table at the USN gathering this year.  It was a wonderful show.  I had the opportunity to meet some really great folks and have quite an enjoyable time.  The show is in Las Vegas and while it isn’t on the top of my vacation destination list (vacation.. not sure I know what one of those really is.. ) it is probably the best locale for the Gathering.

The second show was the North West Knife Collectors show in Kelso Wa.  I always find it enjoyable to spend some time with the local makers and collectors.  This is probably the smallest, in terms of traffic, of all the shows I do.  This fact sort of makes it a nice way to end the show season.

October has really just been a zoo.  It started off with the Kelso show on the 5th and 6th, so the first week was show prep and show.  Then I had 2 weeks to finish up some kitchen knives for Town Cutler in San Francisco, before I headed to Oakland for one of the most amazing hammer-ins I’ve had the pleasure of attending.  With travel time the trip took about 9 days (dang the kittens were both cranky and clingy by the time I got back).  Now before I go any further let me take a moment to explain what a hammer in is for non-smithing folks.  The easiest way to think of it is sort of like a conference.  There are usually presentations, demonstrations, lots of discussions with other professionals in your field, possibly a fundraising auction or sale, and probably some show and tell by the general participants.  The biggest differences are probably that our “Cons” are smaller, held in Industrial spaces or the middle of nowhere, involve sharp pointy bits of metal and Fire.. oh yes lots of fire.

The trip started with me driving down to Eugene and meeting up with Michael Kemp of Elemental Forge.  The next day we drove down to Oakland and made camp at the hotel where we would be spending the better part of a week.

The hammer-in ran Thursday afternoon through Sunday afternoon/evening.  Thursday was a free form kind of day starting at 2:30ish.  Which gave Michael and I the chance to go into SF in the morning drop off the knives I had for Galen and finally see his shop.  Ahh yes driving/navigating in downtown SF.. street grids that clash.. one ways.. endless no left turns.. steep hills  with trolley cars..  but here is proof we made it, a picture of Michael at Town Cutler [hey this is my blog I can avoid being in the actual pictures if I feel like it 🙂 ] 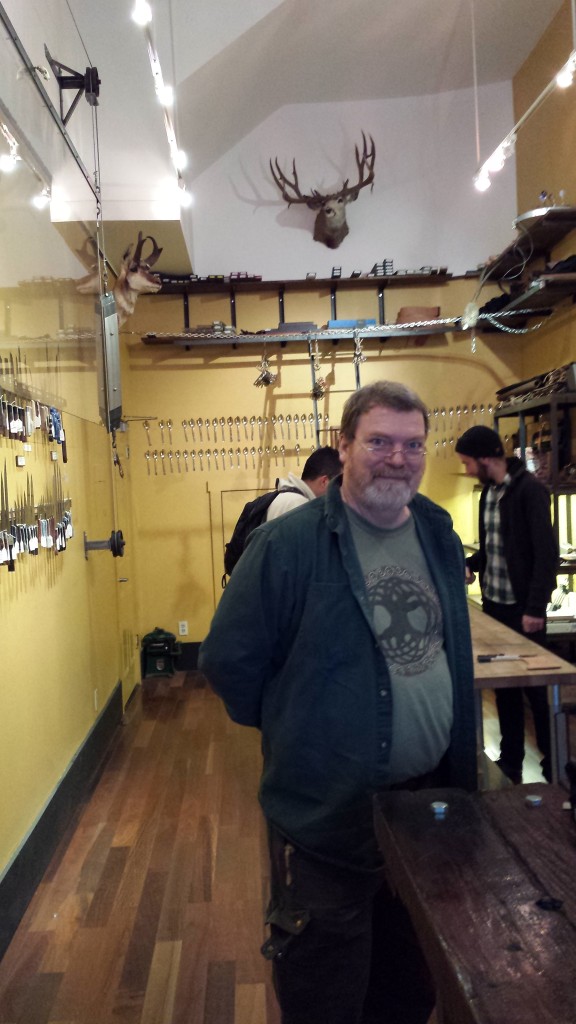 After that back to Oakland, lunch procured, and time wasted till around 2:30 when we headed off to Alchemy Metalworks.  This being the name of the shop where the conference was taking place.  This is the shop of James Austin who was one of the hosts and a presenter.  Jeff Pringle was co hosting and presenting. The additional presenters, in no particular order, were Owen Bush, Petr Floriánek, and Jake Powning.  The official title of the conference was “Oakland Axe’n Sax-in 2013” and as the name implies the focus was on axes and seaxs.  Thursday was filled with socializing and show and tell for the most part.  In the evening Jeff cranked up a propane furnace and did a crucible smelt  turning magnetite into iron and steel.  Which looks something like this:

It would really take to much to go into detail about all the presentations.  Suffice it to say there were talks about Germanic art, artifacts, leather work, antler carving, axe eye welding, historical broken back seax construction, and more melting/smelting.  Really it was a wonderful 4 days and I can’t thank the hosts enough.  Heck even the attendee list had a high percentage of very notable smiths.

Rather than ramble on any more I’m going to insert a gratuitous photo of one of the Alchemy Metalworks shop cats.

And in closing I’ll taunt you with a couple photos showing the top and bottom of the first “puck” of steel crucible-smelted from Colombia river magnetite ore. 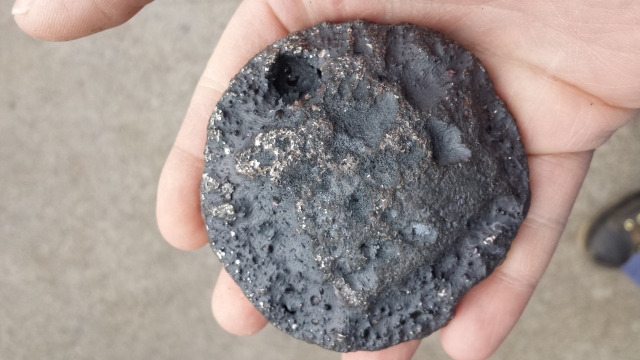 2 Responses to Closing out October with an Update